Nice, but flat course. Not so muddy. Again lots of entrants so getting through the traffic on the single-track was difficult.

One guy I overtook at least three times, but he kept re-appearing in front of me. I'd noticed this on previous races, but thought I must have missed him getting back in front. This time I definitely saw him and his mate completely cut out one section of the course as I nearly crashed into them as they came up the road across the bordering tape. Why bother racing if you're going to cheat. Sad isn't it?

My GPS track. Notice that my cadence just stops? I must have bashed the sensor when I came off, and I've just seen that it is bent over touching the rear rim, so nowhere near the pedal where the triggering magnet is placed.

My helmet-camera also failed, I think because of the tumble, it must have jolted the SD card loose. When I finished the race it was displaying "Err". Wish it'd captured it, it would have been funny to see and alleviated the pain of having developed some lovely bruising on my chin, right clavicle, left hand, hip, and shoulder. Anyways I have lots of other video snippets from a hi-definition hand-held camera following other riders on the course, which I shall put up presently, when I've edited them to display on the more usual players out there.

Came in just behind the winner ( although mumble mumble he'd just mumble mumble lapped me for the mumble mumble second time ) and collided with a photographer who jumped right out in front of me to take pictures of him. Well, it is one way to stop, and my brake pads were finished anyways. Luckily no one else was following otherwise it might have been a pile up. 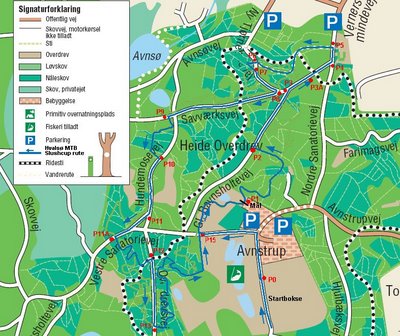 Very muddy course in todays race. Completely gummed up the wheels so ended up walking most of the course.

It was way out in the countryside at Avnstrup which is south of Roskilde. My GPS track is fine. Managed one lap, could have done two but I was only 5 minutes inside the hour, so it'd be another hour before I got back in and as it was my rear suspension failed again, but just before I finished the lap. Really annoying. Suppose I shall try and find something more agricultural... 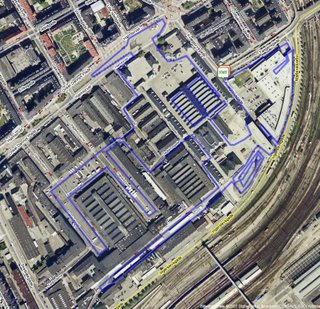 Relatively flat course, apart from two hills. Very sticky mud nearly everywhere. Where there wasn't mud, the already attached mud picked other bits of the road surface up and attached it to my bike. The bike ended up very heavy.

First attempt at filming the race. So of course managed to get camera people organised, but forgot to check my own batteries! So no in flight shots. Learning experience though...

As the race was close to home thought I'd cycle there as a warm up exercise, but got lost, (typical,) and spent an hour getting to the start. Luckily several others were heading there, recognised me, (looking lost by the side of the road,) and pointed the right general direction, which was real nice of them.

The warm up served its purpose: boy have I shot up the rankings. Shall do that again, (go for a ride to warm up,) before the next race, to see if it was a one off or does actually help.

Some video, not mine I might add, but Thomas Stahl Nielsen, I haven't sorted mine out yet.

My GPS track using the MotionBased Activity Player. OK not all that fast, but I enjoyed myself.

Stunningly bizarre array of prizes were handed out. Lots of Barbie Calendars, My Little Pony collector set, a hairstyle and makeup head (the bemused face of the chap who won that was a picture, wish I'd had a camera), and then lots of assorted ladies jewelery: necklaces, ear-rings, etc. etc.

I won a necklace with beautiful little jeweled heart pendant, from the prize draw, not 'cause I came anywhere other than near the back. This sponsor was Melcher of Copenhagen. It's a really pretty necklace. Maybe I should wear it to work tomorrow.